‘A Carpet Made For Kings’ And Other Asian Textiles That Nelson-Atkins Curators Don’t Want You To Miss | KCUR 89.3 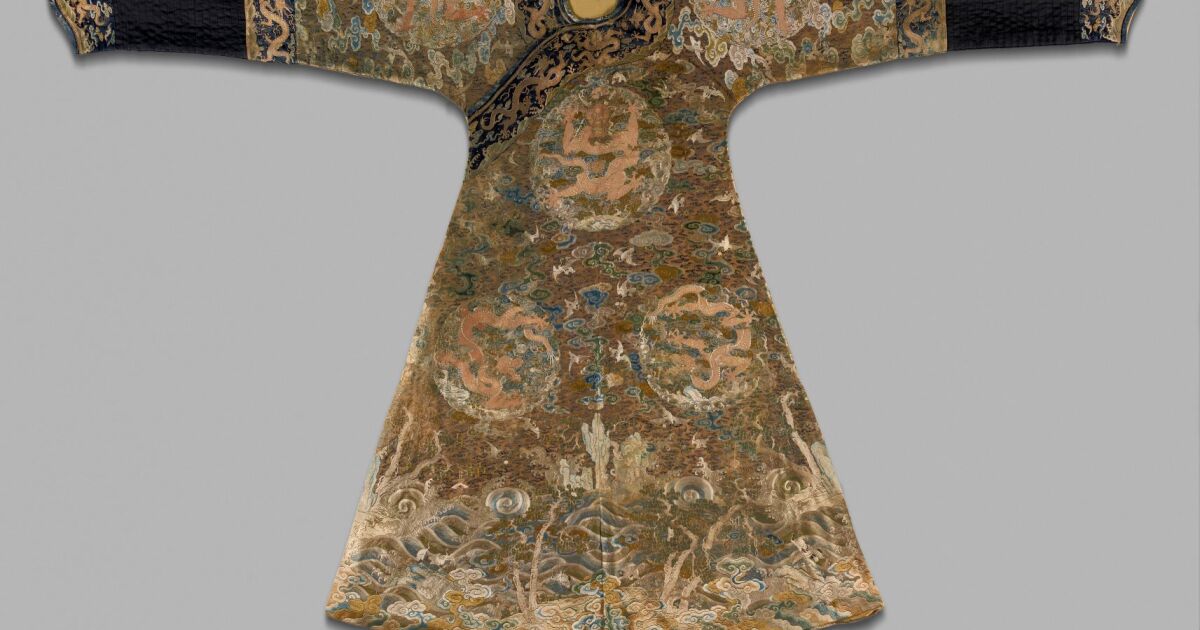 When you’re walking through a new exhibition, it can be helpful to have a guide to tell stories about the country where a work was created or point out details about materials, techniques and imagery, such as cranes, with a special meaning.

The new exhibition Weaving Splendor: Treasures of Asian Textiles at The Nelson-Atkins Museum of Art features works rarely on view from across Asia, dating from the 16th century to the present — including wall hangings, furniture, costumes, and “a carpet made for kings.”

We asked three Nelson-Atkins curators to talk about some of their favorites.

Yayoi Shinoda is the assistant curator of East Asian Art at the Nelson-Atkins and her research focus stretches from medieval to early modern Japan. Shinoda’s pick called Hanging with Hōō and Pine Tree dates from the late 19th into the early 20th century.

“This fully embroidered hanging demonstrates the embroiderers’ technical mastery to use silk and gold-wrapped silk threads to create a painting-like work,” she says.

“A closer look reveals an array of embroidery techniques the embroiderers used to create different textures, such as the smooth surface of birds’ feathers and the rough pine tree bark, that enliven the scene.”

Ling-en Lu is the curator of East Asian Art and joined the museum staff in 1999. There are two works in the exhibition that she doesn’t want visitors to miss.

The first, Hanging with Lantern Design, a silk and metallic thread brocade, dates back to the Ming dynasty in China (1368–1644) in the 15th and 16th centuries.

“The lustrous lanterns and florals glow on the dark blue background of this brocade hanging, recalling the luminaries that brighten the chilly winter evening of Lantern Festival,” describes Lu.

“On the fifteenth day after the Lunar New Year, Lantern Festival is among the favorite celebrations in many Asian countries.”

Lu’s second highlighted work, a robe created for royalty, is also from China. One Hundred Cranes Imperial Robe dates from the Qing dynasty (1644–1911) in the late 17th and early 18th centuries.

“They achieved the detail of a painting, covering the silk damask fabric with dragons, pine trees, waves, cranes, and peaches that carried positive meanings for the owner – Prince Guo (1697–1738).”

Kimberly Masteller, curator of South and Southeast Asian Art since 2008, says one work “dominates the gallery in the second half of the exhibition.” It’s a grand Persian carpet.

“Look closely, and you will see traces of metallic brocade glinting between colorful flowers, scrolling vines, and leaves, created in silk pile,” Masteller describes. “This was a carpet made for kings, and these carpets in the ‘Polonaise’ style were created in the royal workshops of Shah Abbas I in Iran as diplomatic gifts and luxurious exports.”

“It is well known because it was such a luxurious and desirable fashion item in Europe in the 18th and 19th centuries, the Hermes scarf of its day,” says Masteller. “We are exhibiting a square shawl created around 1870 that is completely filled with intricately woven patterns and embroidered details.”

She adds, “It is a knockout, and it is easy to see why these were popular all over the world.”

Technology
We use cookies on our website to give you the most relevant experience by remembering your preferences and repeat visits. By clicking “Accept All”, you consent to the use of ALL the cookies. However, you may visit "Cookie Settings" to provide a controlled consent.
Cookie SettingsAccept All
Manage consent