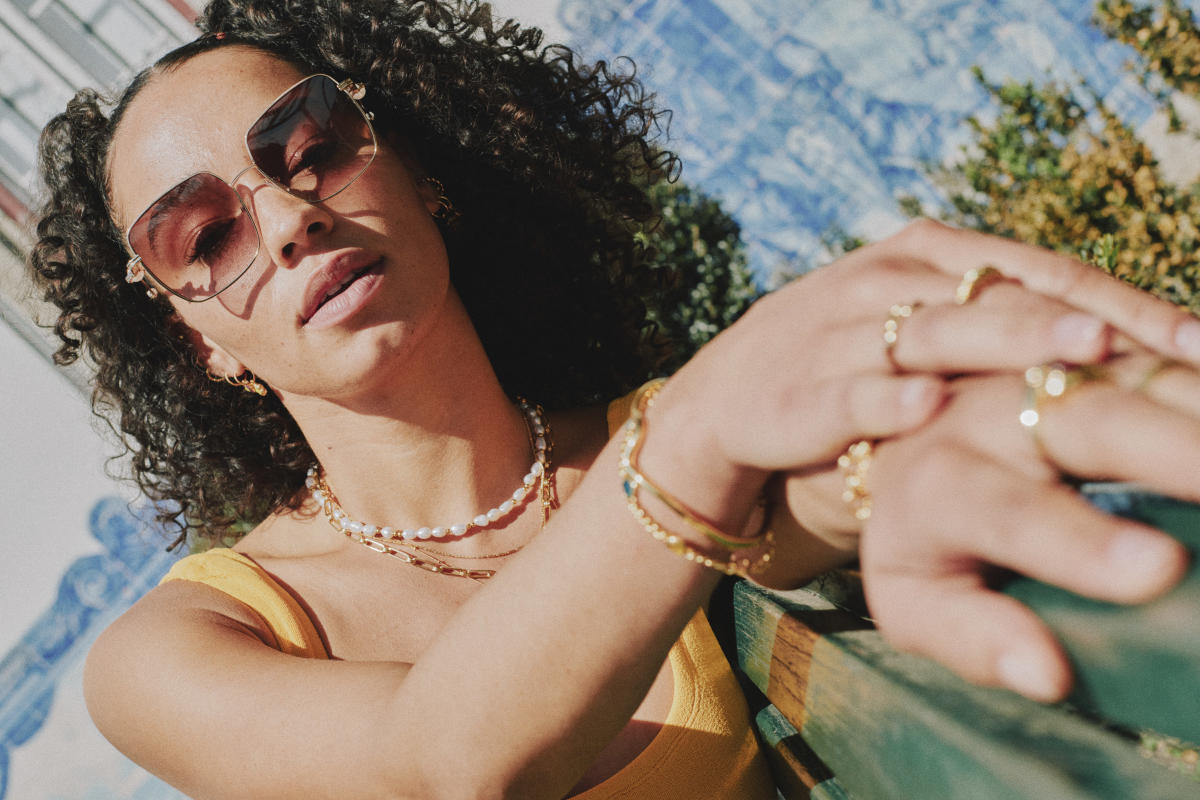 LONDON — Fine jewelry has been flying in these hard times and so have demi-fine designs, according Marisa Hordern, who has seen Missoma‘s sales rocket from 1 million pounds to 33 million pounds in the past five years.

Since the company’s founding in 2008, Hordern’s strategy has been to stay close to her Millennial and Gen Z audience, strike up long-term relationships with influencers and collaborators and move with the cycles of the economy.

Hordern knows that 150 pounds is a sweet price point, and that as soon as it creeps up “sales start to drop off.” She also believes that silver will become more mainstream in the next six months “because anytime you have economic uncertainty, silver will follow gold,” while delicate jewelry, she believes, is always popular in the wake of a recession.

On April 23, Hordern was recognized for her business smarts and her sensitivity to trends with Missoma scooping a Queen’s Award for International Trade. Specifically, the award recognizes Missoma’s short-term growth in overseas sales over the last three years.

A Queen’s Award is a big deal in the U.K., with businesses applying, submitting their balance sheets and strategies and competing in categories such as innovation, international trade, sustainable development and promoting opportunity through social mobility.

Missoma has been a pioneer in demi-fine jewelry, which is made from sterling silver, gold vermeil and semiprecious stones, and looks more expensive than it is. For the consumer, demi-fine designs have a similar appeal to contemporary fashion, or premium beauty. It’s a treat more than an everyday purchase, and accessibly priced.

Missoma’s designs are meant to be mixed up and layered, and are popular with customers who can afford much more expensive gems including the Duchess of Cambridge, Emily Ratajkowski, Gigi Hadid, Tommy Dorfman and Billie Eilish.

The recent growth in the business has come from expansion into markets such as the U.S., China, Germany, Ireland and Australia. In three years to March 2021, exports have risen by 222 percent, and now make up 49 percent of all sales. The U.K. remains Missoma’s largest market, accounting for 51 percent of sales.

Collaborations have also powered growth at the brand, which Hordern founded in 2008 after leaving a job on the business side of Compagnie Financière Richemont in London.

Early in Missoma’s journey, Hordern tapped the British influencer Lucy Williams to codesign a collection, which has been one of the brand’s strongest sellers and which has grown considerably over the years. Missoma regularly works with the Beijing-born creator Savi on collections.

The Missoma x Le Specs collaboration was revealed a few days ago, offering eyewear styles inspired by the 1970s and 1990s reimagined with the brand’s bespoke jewelry, golden elements, pearls and malachite.

Missoma operates mainly as a direct-to-consumer model, and sells through a handful of stores including Nordstrom, Harvey Nichols, Selfridges and Matchesfashion. It is also a consistently profitable business, and will report 5 million pounds in profit on 33 million pounds in revenue for fiscal 2021.

Hordern, who designs the jewelry in-house at her Notting Hill studio, now has another challenge on her hands, which is how to manage all of the fast growth, and move Missoma forward.

“This business has been my baby for the past 15 years and it’s an honor to get the Queen’s Award,” Hordern said in a Zoom interview.

“We’ve been looking for a CEO as I want to concentrate on design, sustainability and charity. I want to be the creative director,” said Hordern, who is so pressed for time that she’s been designing the collections on weekends.

The business has grown so fast that there are now 100 people on staff, half of whom joined during the pandemic. She’s also mulling a further fundraising in the next six to nine months.

As reported, Capital Generation Partners, a family-owned private equity firm, invested an undisclosed sum in Missoma in 2019, buying out the shareholding of the brand’s previous partner, a jewelry wholesaler who had invested 100,000 pounds during the label’s infancy.

She said there is so much to do on the back and front ends of the business: Having just launched its first localized site in Germany, Missoma is planning further international expansion with the next localized site set to open in the Netherlands. The company ships to more than 200 countries.

China is another growing market: During the interview, Hordern said Missoma launched there during the pandemic and surpassed expectations, becoming profitable in year one. In the U.S. the brand is rolling out at Nordstrom stores and developing its d-to-c business in the region as well.

There are more projects and collaborations on the way, with Missoma moving into lifestyle accessories such as jewelry boxes and gifts. There are also plans to work with emerging artists.

The company has also been investing in its IT operations and in combatting counterfeiting and copies.

Hordern takes her designs very seriously, and doesn’t want anyone mimicking her creations, and the Missoma look. She takes great pride in having helped to educate the British market about the virtues of gold vermeil, a technique that sees 2.5 microns of gold layered over sterling silver. The technique keeps prices down and gives the jewelry an expensive look and feel.

The company is also making strides on the sustainability front, and there is more to come: Missoma’s jewelry is manufactured by a network of long-term factory partners, primarily in India and Thailand, who are RJC Code of Practice certified.

The brand has also notched a full year of carbon-neutral delivery. On Earth Day in 2021, it partnered with climate-tech platform Vaayu to calculate and offset the carbon from its deliveries and returns.

The company said one of its goals for 2022 is for all of its suppliers to send the jewelry to Missoma’s warehouses in biodegradable polybags rather than plastic polybags.

Like so many entrepreneurs and business leaders, Hordern said sustainability is a work in progress, and that Missoma’s goal is always going to be “responsible manufacturing and sourcing,” fair pay and social policies, and transparent communication with the consumer.

Hordern has always been passionate about jewelry. She studied history at Oxford University and after graduation started working at Richemont in London on the media side of the business, “as the most junior of staff, setting group guidelines and spending my days behind a spreadsheet.”

She made jewelry in her spare time, and decided early on that her future was as a creative entrepreneur. When she does finally hire that CEO, she’ll be coming full-circle, returning to the part of the business she likes the most.

Home Service
We use cookies on our website to give you the most relevant experience by remembering your preferences and repeat visits. By clicking “Accept All”, you consent to the use of ALL the cookies. However, you may visit "Cookie Settings" to provide a controlled consent.
Cookie SettingsAccept All
Manage consent