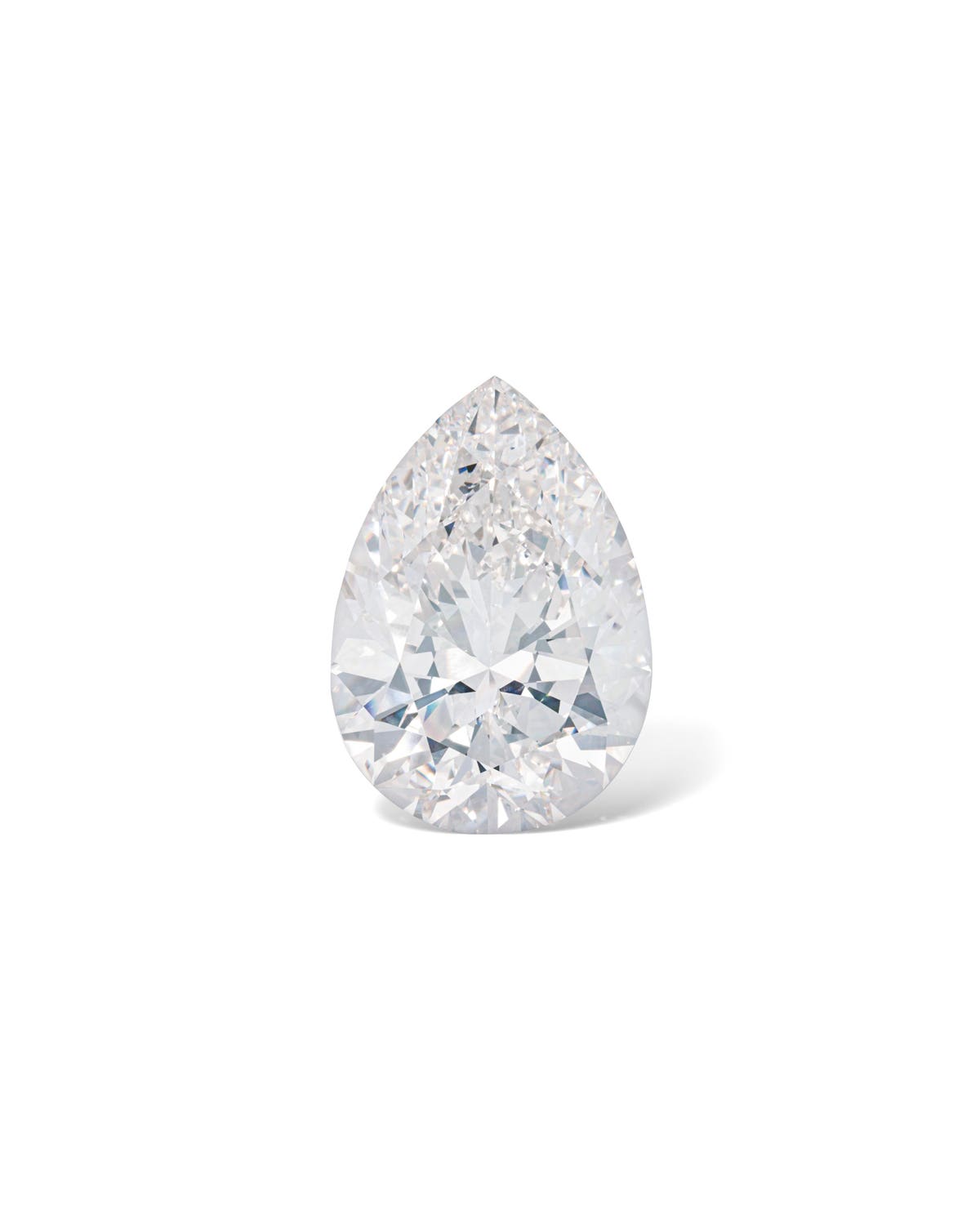 Places like New York, Hong Kong and London certainly have impressive jewelry auctions each year, but Geneva still reigns supreme. Christie’s and Sotheby’s are hosting their spring Magnificent Jewels sales this week and while the number of lots are down from previous (pre-Covid) years, there are some high-quality gems and jewels available.

At 228.31 carats, The Rock (pictured above) it is the largest white diamond to ever appear at auction. The pear-shaped diamond has been graded by the Gemological Institute of America as having G color, VS1 clarity, with excellent polish and symmetry. Its estimate is $20 million to $30 million, making it the top jewelry lot of the week.

This is followed by an equally impressive gem with a long history with Christie’s. The Red Cross Diamond is a 205.07-carat, Fancy Intense Yellow diamond cushion modified brilliant-cut with

VS2 clarity. It was cut in the shape of a Maltese cross. Estimate upon request.

The sale includes tiaras from the 19th and 20th centuries, among them the Fürstenberg Tiara, bearing the mark of famous Austrian jeweler Gustav Flach. It belonged to The Princess of Fürstenberg, née Countess Irma of Schönborn Buchheim (1867-1948), a member of one of the pre-eminent aristocratic families in the Habsburg Empire. Its estimate is $403,700 – $605,600.

A Belle Epoque emerald and diamond tiara, attributed to the Spanish born French jeweler, Marzo, whose Belle Epoque creations are “distinguished by their elegance and fashionable taste,” according to the auction house. Its estimate is $151,400 – $201,880.

The 61 lots in the sale also include creations by JAR, Mouawad and Bulgari.

Online bidding has already begun for Sotheby’s Geneva auction which will culminate with a live auction on Tuesday. Among the 191 lots are two important diamond jewels.

The first is an 18K gold ring by Chopard centered with an 80.08-carat D-color internally flawless step-cut diamond with excellent polish and symmetry, according to GIA, which further states that the gem could be graded flawless with minor repolishing. The diamond is flanked by Mozambique rubies weighing from 1.11 to 1.23 carats with no indications of heating, and with the much-sought-after “Pigeon Blood” color designation. It’s expected to exceed $8.5 million, which will likely to be eclipsed since as of Monday it has a high online bid of more than $7 million.

The second is an 18K white gold ring centered with a 7.17-carat Fancy Intense Purple-pink diamond. The VVS2 clarity gem is presented in a cut-cornered rectangular modified brilliant shape. Its online high bid is more than $3 million as of Monday.

Other highlights in the sale include:

Healthy fitness
We use cookies on our website to give you the most relevant experience by remembering your preferences and repeat visits. By clicking “Accept All”, you consent to the use of ALL the cookies. However, you may visit "Cookie Settings" to provide a controlled consent.
Cookie SettingsAccept All
Manage consent