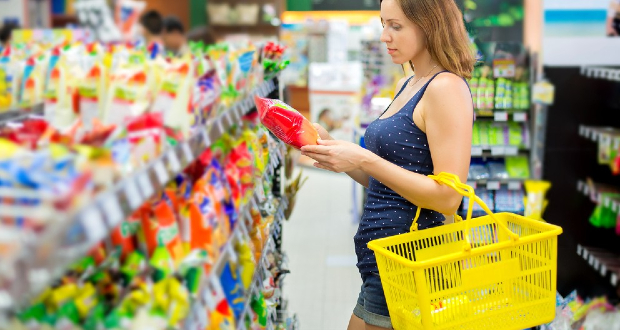 Data from Barclaycard, which sees nearly half of the nation’s credit and debit card transactions, reveals that spending on essential items – such as fuel and groceries – increased 5.7% year-on-year, steeper than September’s growth (3.3%), reflecting the impact of rising inflation.

Supermarket shopping grew 4.6 per cent – 1.8 percentage points higher than last month (2.8%) as the cost of food continued to rise. In response, two thirds of Brits (67%) are looking for ways to get more value from their weekly shop, with almost half of these shoppers (48%) paying closer attention to the prices of items they buy regularly, and the same number buying budget or own-brand goods over branded goods.

More than four in 10 (44%) are opting for cheaper “wonky” vegetables, and one in four (26%) is only buying items that are discounted or on offer. A further 13% are even growing their own produce at home to save money.

Spending on utilities grew 36 per cent – much lower than September’s increase of 48% – as many households started receiving their discounts from the government’s Energy Bills Support Scheme.

Spending on non-essential items rose 2.5% year-on-year – higher than September (1.0%) but lower than July (8.0%) and August (3.6%) – with several categories recording moderate growth due to rising inflation, as well as changing consumer behaviours.

Pharmacy, health & beauty stores grew 3.8% in October – considerably higher than last month (0.8%) – suggesting that image-conscious consumers are still keen to purchase items such as make-up and toiletries, even while spending more nights in.

With the festive season fast approaching, almost half (48%) of Brits are planning to cut down on Christmas purchases to save money this year. Of these consumers, six in 10 (59%) will be spending less on gifts for family and friends, 44% will cut back on festive food and drink, including turkey and mulled wine.

Against a backdrop of political and economic uncertainty, confidence in the UK economy fell sharply to 15% – the lowest level recorded since 2015, when Barclaycard began tracking this data – and less than half the level this time last year (31%).

Meanwhile, 92% are worried about the negative impact of rising inflation on their personal finances, with 30% of Brits assessing whether every individual purchase is necessary and a fifth (19%) feeling that the cost-of-living squeeze is having a negative impact on their mental health.

Esme Harwood, director at Barclaycard, said: “Rising petrol and supermarket costs continue to bite, but Brits are spending less on energy bills as government support kicks in and people find ways to economise at home. Consumers continue to swap big nights out for cosy evenings in as they reduce their discretionary spending.

“With the festive season around the corner, we’re likely to see further cutbacks, as Brits reign in their Christmas spending.”

Loan and Mortgage
We use cookies on our website to give you the most relevant experience by remembering your preferences and repeat visits. By clicking “Accept All”, you consent to the use of ALL the cookies. However, you may visit "Cookie Settings" to provide a controlled consent.
Cookie SettingsAccept All
Manage consent