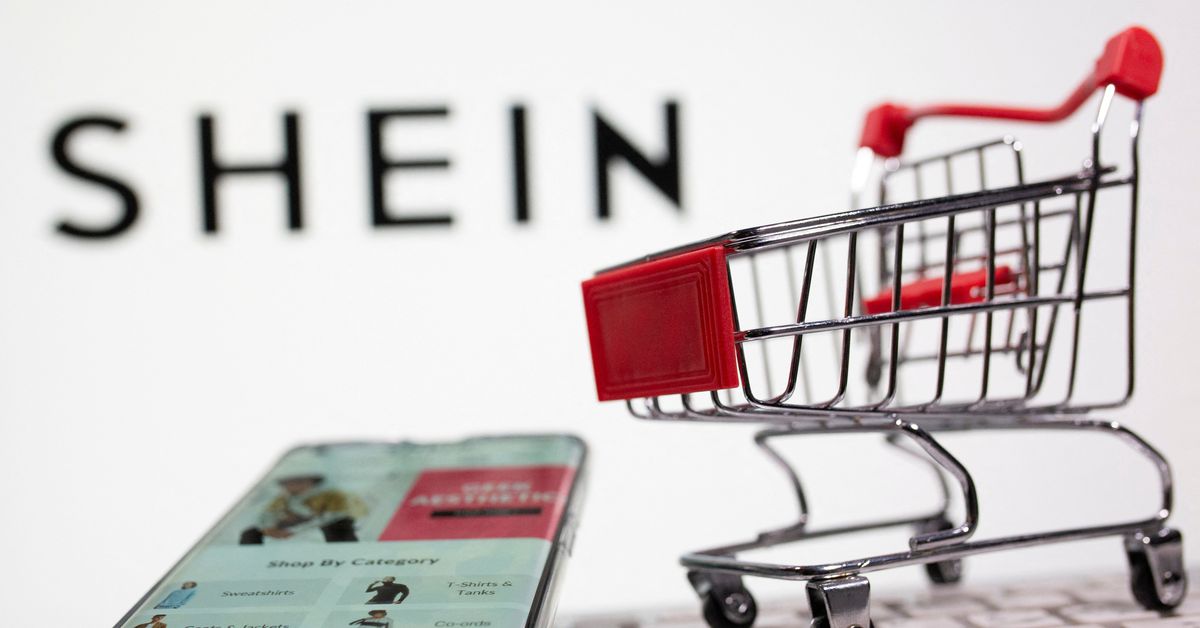 A keyboard and a shopping cart are seen in front of a displayed Shein logo in this illustration picture taken October 13, 2020. REUTERS/Dado Ruvic/Illustration

SINGAPORE, Feb 16 (Reuters) – China’s Shein is aggressively expanding its Singapore office after making a Singapore firm its de facto holding company, according to people with knowledge of the matter and a Reuters analysis of filings by the online fast-fashion retailer.

Chris Xu, Shein’s founder and CEO, has also become a permanent resident of the city-state, according to a document.

Shein, which Xu started in 2008 in Nanjing and has since grown into a global fashion marketplace, last year de-registered its main business, Nanjing Top Plus Information Technology Co Ltd, a Chinese corporate filing shows.

The developments are in line with what other sources have previously told Reuters are revived plans by Shein to list in New York this year and Xu looking at a change in citizenship to bypass tougher Chinese rules for offshore IPOs. read more

Singapore-registered Roadget Business Pte, which lists Xu and three others as its representatives, was established in 2019 and since late 2021 has been the legal entity operating Shein’s global website, Singapore filings show.

Sources for this article were not authorised to speak to media and declined to be identified.

Shein did not directly address Reuters queries as to whether it had moved its legal and administrative home to Singapore, saying only that it has centres of operations in major markets including in China, Singapore and the United States.

Shein, which was valued at about $50 billion in early 2021, produces clothing in China to sell online in the United States, Europe and Asia but doesn’t sell in China.

Shein did not comment on Xu’s permanent resident status in Singapore or whether he’ll seek Singapore citizenship. Xu is “a Chinese citizen with long-time roots in China, it said, adding that he was not available to answer queries on the matter.

Melissa Ow, executive vice president of the Singapore Economic Development Board, declined to comment on whether the board has had discussions with either Shein or Xu.

Shein aims to quadruple the number of its Singapore employees to around 200 by the year’s end, two people familiar with the matter told Reuters.

It is currently advertising for government relations associates as well as for staff for human resources, marketing and IT. Shein said it is expanding its Singapore offices to support the firm’s growth in the Southeast Asian market.

Despite fierce competition, Shein has become one of the world’s largest fast fashion marketplaces by targeting the social media-savvy “Gen Z” generation, making heavy use of influencers and discount codes.

Items such as $10 dresses and $5 tops help draw hundreds of millions of visitors to its website each month. The company made around 100 billion yuan ($15.7 billion) in revenue last year, sources have said. It has about 7,000 employees worldwide, according to its website.

Singapore, an Asian financial hub with a large ethnic Chinese population, is viewed by some businesses as a neutral base amid trade tensions between China and the United States. Chinese tech giants such as TikTok owner ByteDance and Tencent Holdings (0700.HK), have in recent years set up regional hubs in Singapore. read more

A New York IPO for Shein, if finalised, would likely be the first major equity deal by a Chinese company in the United States since China’s regulators began tightening oversight of such listings last July.

Chinese firms, particularly those with large overseas markets, are attracted to the deep pool of potential financial investors in the United States.