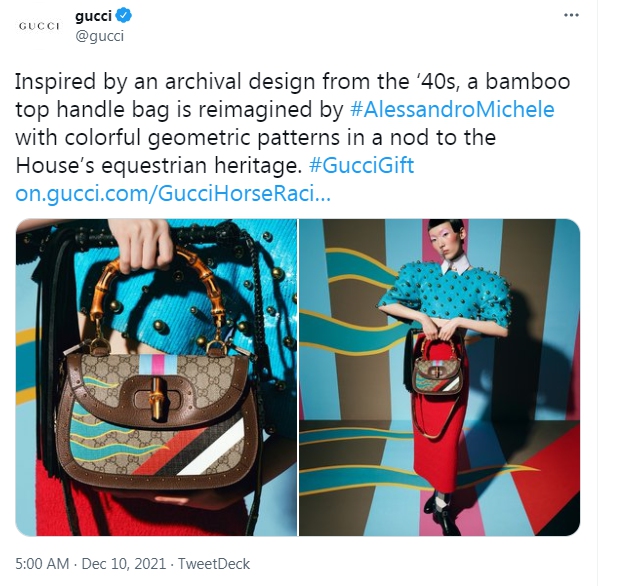 Gucci posted an ad featuring an Asian-looking model with “scary” makeup, an exaggerated nose ring and a leather whip in her hand on December 10,2021. Photo: screenshot from Gucci’s official Twitter account

With the waves stirred up by slanted-eyed model posters of Three Squirrels and Mercedes-Benz still unsettled among the Chinese public, a new wave hit on Wednesday as an advertisement of Italian luxury fashion brand Gucci was found to feature an Asian-looking model with small eyes, “unconventional” makeup, an exaggerated nose ring and a leather whip in her hand.

In an advertisement for its new series of bamboo top handle bags posted online on December 10, an Asian-looking female model is seen holding a bag. She’s wearing makeup emphasizing her pink, light eyebrows, small eyes, and high cheekbones that amplify the “Asian face” typically depicted in the Western narrative.

After the poster came under the spotlight on China’s social media platform Sina Weibo, the Global Times found on Wednesday that the luxury brand did not show the model’s photos on its Weibo account, only showing photos of the bag, while on Twitter both the model and the bag were visible.

Gucci’s different treatment of Chinese and Western consumers has been slammed by Chinese netizens who say it’s “clearly a manifestation of a guilty conscience,” and that the brand knew it had presented a Western-style Asian appearance that would irritate the Chinese audience.

“It’s not about how the model herself looked, nor does it indicate that we refuse bold or innovative fashion styles other than the traditional sense of beauty. It’s about whether a model has been portrayed to specially cater to Western eyes, or has been deliberately created to follow Western stereotypes,” a Beijing resident told the Global Times.

Some find the nose ring and leather whip particularly disturbing. “The photos gave me a chill. The makeup and the atmosphere are just morbid,” said one netizen.

Zhu Wei, vice director of the Communication Law Research Center at the China University of Political Science and Law, told the Global Times on Wednesday that “If we don’t oppose such discriminatory labels, there may be more Western enterprises coming up with these images thinking it’s a ‘key for gaining exposure’.”

“Like the term ‘nigger’ can’t appear in a Hollywood movie, in fact, the West knows where our taboo is, but it is still willing to touch upon it,” Zhu said. “This is extremely disrespectful to our culture. The disgust and revulsion expressed by the whole society toward this kind of insult should be heard.”

It is time for the West to hear such opposition, which is the simplest sign of the popular will, Zhu said.

The controversy surrounding the “Asian face,” which ignited public fury in recent days, started on Sunday with an advertisement by famous Chinese snack retailer Three Squirrels. It posted a model featuring small, slanted eyes that netizens accused of catering to Western stereotypes and insulting Chinese.

Soon afterwards, some found the German automobile giant, Mercedes-Benz, posting models with similar styles of makeup that emphasized slanted eyes in one of its advertisements published on Saturday.