How to use TikTok for business: Tips from the Sani Sisters 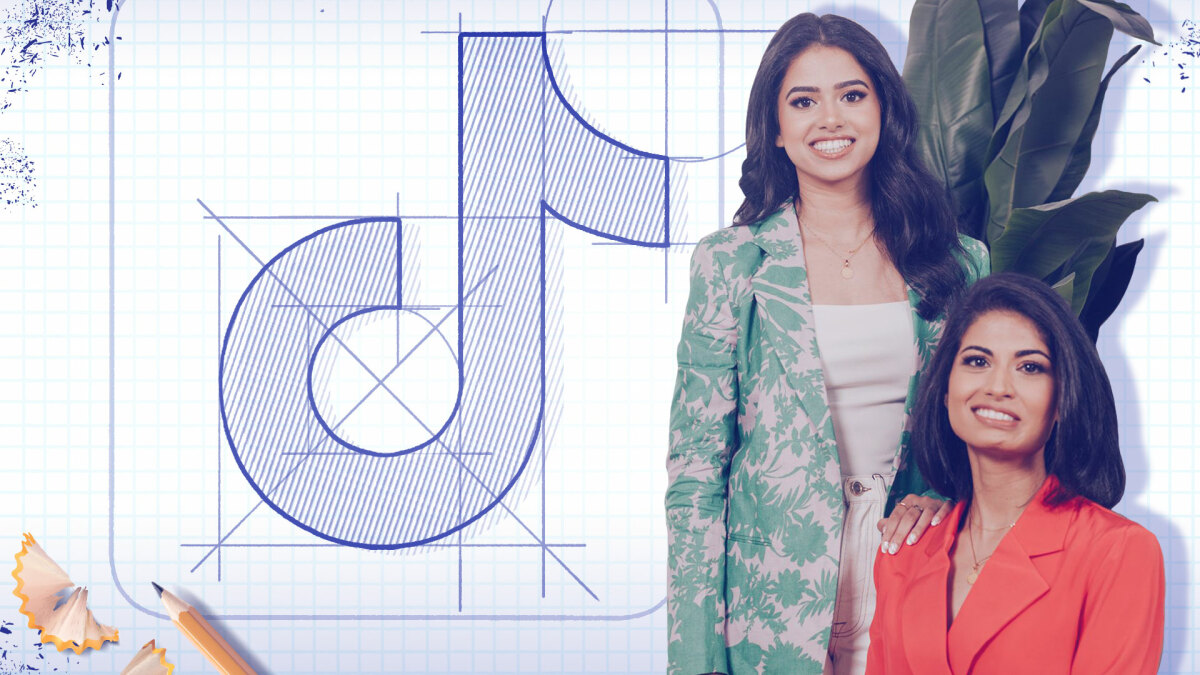 Sisters Niki and Ritika Shamdasani founded Sani, because they, like many other South Asian-Americans, struggled to find formalwear in the U.S.

“The stat we found is 82 percent wait to go to India to shop, even if they have weddings here, because it has traditionally not been super accessible,” said Niki. “So we said, let’s design the pieces that we want to see.”

In 2020, they launched the brand and became the first South Asian brand to be carried by Rent the Runway. It was a huge success, selling out in 48 hours and driving a surge of traffic to the Sani site. But two weeks later, the pandemic hit.

They got on TikTok (as @sanisisters) thinking that it was just a way to keep up brand awareness. After the first few attempts, they struck gold with their sixth video with the “And it went like…” sound, gaining three million views.

It was the beginning of the pandemic, so people weren’t really buying formalwear, but Niki and Ritika immediately experienced the benefits of virality in other ways. People they’d reached out to suddenly started responding, and new business opportunities started popping up.

How to sell your clothes online, even if you’re a total beginner

Since then, TikTok has become the biggest sales driver for their business. So far, they haven’t done any paid campaigns or influencer campaigns. It’s all been organic traffic driven by their brand account. Simply put, “I don’t think Sani would exist, if we hadn’t made that choice [to go on TikTok]” says Ritika.

TikTok has been vital to Sani’s success, but so has slow, deliberate effort. Mashable asked Niki and Ritika about their own hard-won experience and advice they have for other businesses on TikTok.

Put your spin on a trend

Ritika says they don’t really try to make content that feels “sales-y,” because it doesn’t perform well and it’s not what the app is meant for. “When we’re thinking about actually creating content, it’s more like how can people get a better idea of who Niki and I are as people, and what our products are all about?

For inspiration, Ritika scrolls the For You page for ideas that she thinks Sani could reinterpret. Capitalizing on the hype around the second season of Bridgerton, she posted a TikTok about what Sani designs the Bridgerton characters would wear.

Ritika remembers a fellow panelist at a TikTok event saying, “there’s a reason that you’re doing what you’re doing, because no one’s going to do it like you.” This advice has stuck with the sisters as a reminder that their unique knowledge and perspective has value.

This becomes the jumping-off point for all of the TikTok content you create. Start making videos to find the series that works for you. “Get started with five different types of videos,” says Niki. “Whether that’s ‘a day in the life of the founder,’ or ‘here are the three coolest things about the product,’ or ‘behind the scenes,’ pick five different things, see what might perform well, if one of those five things does do well see what sort of series you can create from that.”

Niki and Ritika wanted to focus on sharing their in-depth knowledge of South Asian fashion and design, which laid the groundwork for series of videos about topics like what to wear to an Indian wedding or event and what to know when shopping in India.

A regular series creates consistency, which forms the basis of brand recognition. “People can start to associate you with that series and that consistency,” Niki continued.

Think about quantity over quality

It can be daunting to get started, but trying to make it perfect won’t help. “Don’t get in your head too much about the quality. Just make stuff. Put it out,” says Niki. “Because that’s the way that you’re going to figure out what’s resonating with people.”

In other words, the more ideas you try in the beginning, the faster you learn what performs well. There’s definitely a learning curve, but it gets easier, says Ritika. “At the beginning, it can be intimidating, but it’s all about just posting that first video, and after your third, fourth, or fifth, video, it’s just going to become like second nature to you.”

Learn from your followers

“Literally, every aspect of our business has been influenced by the comments [from our followers],” says Niki.

Last year they posted a model call for South Asian-American women who weren’t professional models. “We thought we’d maybe get 100 applications, we got 1,800 applications in less than a week,” said Niki. “People sent us essays over email about representation and what it meant to us. And that’s just one example.”

Additionally, after listening to feedback, Niki and Ritika extended Sani’s size chart to create more plus-size options, incorporated a variety of styles that people want to see, added more videos to their website “so people can see more of a 360 view,” and found new distribution opportunities and partnerships.

Feedback has even led to the development of a loungewear collection. “Non-South Asians kept commenting on our formal wear videos saying, ‘Can I wear this or is it appropriation?’” said Niki. “And so we would talk about that — and we don’t think it’s appropriation if you have context to wear those pieces — but also what are some pieces we can come out with that don’t require you to go to an Indian wedding.”

For Niki and Ritika, TikTok has been vital to understanding Sani’s customers and making informed business decisions.

Ritika says sometimes they spend hours filming and editing a video only to find it doesn’t perform well on TikTok. In other words, “try different things, post a lot of different things, because you never know what’s going to work.”

That being said, a common thread for their most successful videos are the ones where they’re having fun, adds Niki. “We were in a really good mood, and just creating from that good mood. We just put it out without overthinking.”

Unlike other platforms, TikTok lends itself to that kind of authenticity. “With TikTok, that pressure kind of goes away. It’s about just bringing good energy to the platform, not very uptight energy, or, boxed-up energy,” says Ritika. “You’re seeing so much of a person through video. So those are some things that we like to think about, and, I think, what’s really led to videos going viral.”