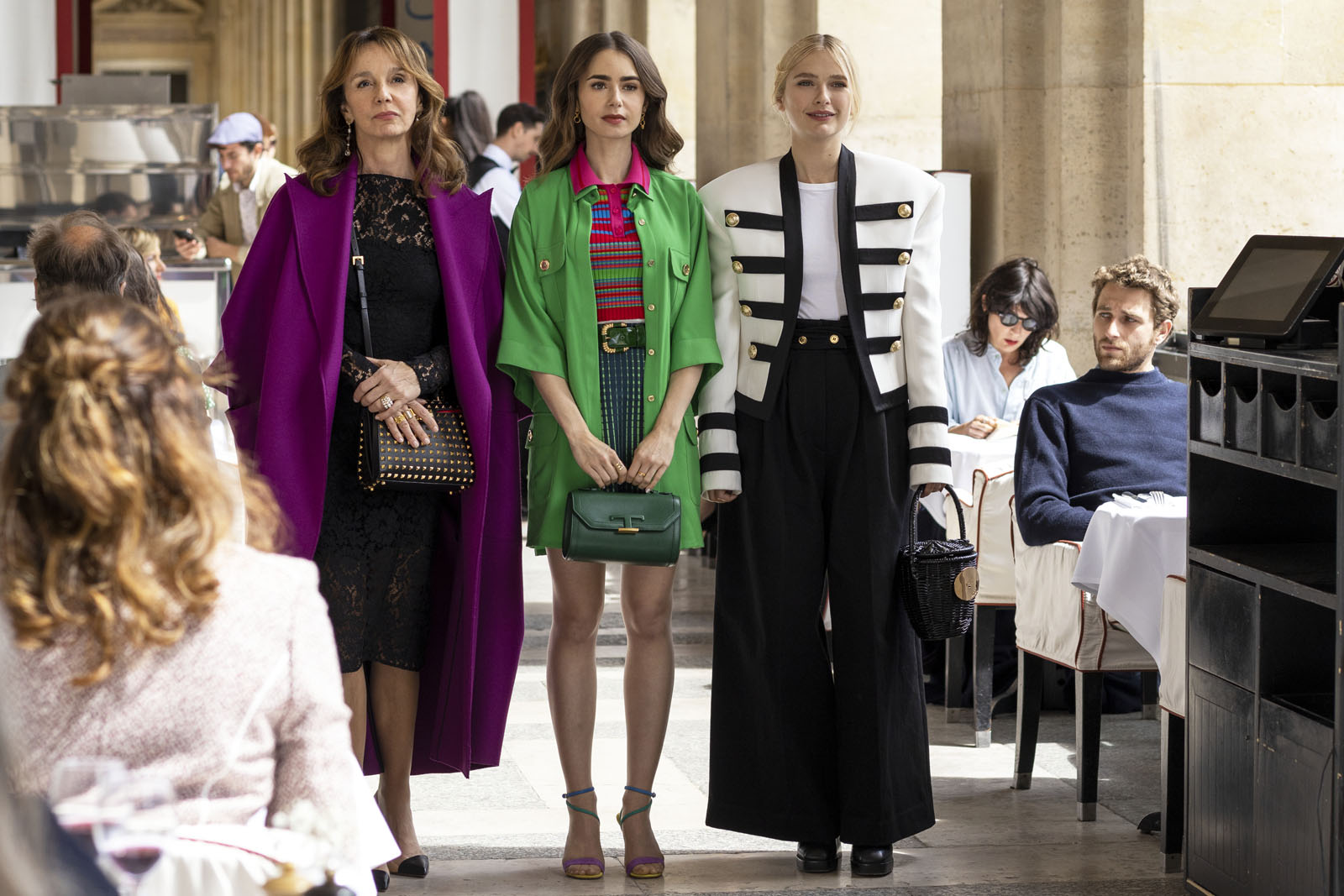 In 2021, the greatest fashion influencers are TV shows. Whether it’s because we stayed in more, or because Netflix dropped series after series, here’s how TV shows have become a true playground for the world of fashion.

TV shows have never been as influential in fashion as in 2021, bringing back pieces like the beret, the retro tracksuit and the corset. The phenomenon is here to stay, it seems, and it could even transform the industry’s digital landscape with new online platforms making it possible to buy clothes spotted in our favourite series.

The number of available streaming platforms plus the various Covid-19 lockdowns have led many of us to devour TV series, binge-watching episodes at top speed, sometimes switching between series with totally contrasting worlds, from “Squid Game” to “Emily in Paris.” It didn’t take much for the shows available on Netflix, Amazon Prime Video, Disney+ and the likes to start influencing our shopping habits, especially in fashion.

Throughout 2021, series have continued to impact our clothing searches and purchases. The red jumpsuits, retro tracksuits and pristine white slip-on sneakers from “Squid Game,” the corsets from “Bridgerton,” the checked coats from “The Queen’s Gambit,” the Nike Air Jordans from “Lupin,” and of course the ultra-fashionable gear from “Emily in Paris”… From the very beginning of the year, our wardrobes started to resemble those of our fictional heroes.

The craze was such that whole styles were even born thanks to these shows, with trends like regencycore, royalcore or cottagecore. And that’s something which, until now, had never happened, even if shows like “Gossip Girl” and “Sex and the City” have influenced fashion in the past. And it looks like this is just the beginning…

Designers and major fashion houses themselves are starting to ride the wave, starting with Gucci, which has featured one of its collections in a mini-series co-directed by the filmmaker Gus Van Sant. Balmain too, under the leadership of its avant-garde artistic director Olivier Rousteing, announced this summer the launch of its own mini-series, in partnership with British TV’s Channel 4. After all, if you’re going to showcase your creations, you might as well do it in your own world. But this tactic is even more effective when the series in question is watched by tens of millions of viewers.

Stella McCartney partnered with the hit Netflix series “Sex Education” for a good cause, creating an exclusive short film and T-shirt for a new Breast Cancer Awareness 2021 campaign. Indeed, the influential power of these shows can not only sell, but also serve good causes and raise awareness among younger generations. And that can only be a good thing. There is no doubt that other industry players will progressively jump into this field, which promises to be more than fruitful.

But TV series could quickly go from being fashion influencers to major players in a sector that is evolving at high speed in digital realms. In fact, 2022 is shaping up to be a year when we’ll be able to shop the wardrobe of our favorite onscreen characters at the end of each episode. Netflix has partnered with ViacomCBS Consumer Products to allow fans of the series “Emily in Paris” — season 2 of which lands on the streaming platform on December 22 — to buy the clothes, accessories, shoes and bags worn by Emily Cooper, played onscreen by Lily Collins.

According to Women’s Wear Daily (WWD), the creations will be offered for sale on Netflix.shop, saks.com and other platforms. Since the first season was watched by more than 50 million subscribers (at least), the said fashion pieces are likely to be snapped up like hotcakes, no doubt giving others ideas. In fact, major fashion houses could then be keen to get themselves into TV shows much more often, and in a more visible way. Still, the fact remains that most of the clothes seen in the series — period costumes in particular — are unique pieces created specifically for these fictional worlds.

Former Vogue editor Sara Klausing could help change the game, and drive the phenomenon further, with the Seek platform, as the famous fashion magazine announces. This e-shop lets fans find the clothes and beauty products that appear in the most popular series and movies in just a few clicks. And when the creations are unavailable, the expert picks from a selection of pieces that closely resemble them. All you have to do is create an account on the platform, browse the relevant tabs for series and movies, and start shopping.

For “Gossip Girl,” there’s a version of the Baguette bag by Fendi, a pair of Christian Louboutin heels and a pair of Stuart Weitzman thigh-high boots, while for “Squid Game,” fans can obviously find Vans Slip-On sneakers. Everything is for the first time gathered on a single platform, facilitating the research work of binge watchers and fashion addicts alike. And this e-shop goes even further, since for the “House of Gucci” movie, it’s possible to rent Villa Balbiano that features in the production via Airbnb.

These new online shopping experiences aren’t likely to go unnoticed, and should even multiply at high speed in the coming months as the real and fictional worlds collide.

This article is published via AFP Relaxnews.

fashion beauty
We use cookies on our website to give you the most relevant experience by remembering your preferences and repeat visits. By clicking “Accept All”, you consent to the use of ALL the cookies. However, you may visit "Cookie Settings" to provide a controlled consent.
Cookie SettingsAccept All
Manage consent