Pay What You Can at this Organic Grocery Store in Paris 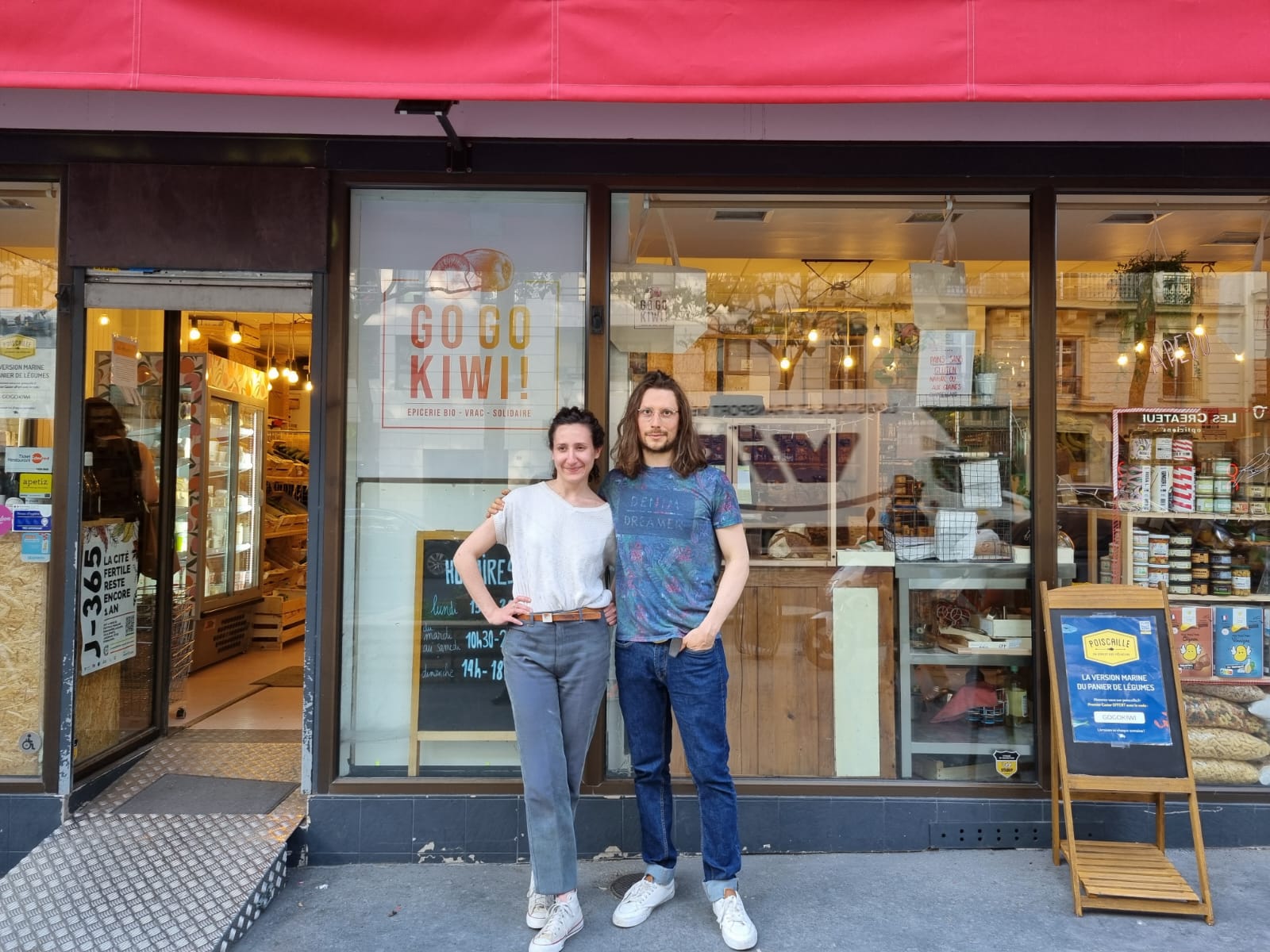 “Eating well and not contributing to pollution shouldn’t be a luxury, it should be a basic right,” says Alexandre Cloux, founder of Go Go Kiwi, one of Paris’s more unusual organic stores.

The trend of organic, or bio products, as they are known in France, has been growing steadily over the last decade. France currently has the second largest number of organic producers in Europe (after Italy), and retail sales of organic products in France have skyrocketed. Bio stores like Biocoop and Naturalia now make eating organic food readily accessible in France… if you can afford it.

So, spotting the growing trend, Cloux developed an organic food store based on a simple premise: “The less the customer earns, the less they will pay.”

He started developing an interest in organic products in his late 20s, and at 28 began working for Biocoop. It was there that he met his business partner Julie Vidart, who shared his aspirations towards making organic food accessible. They both became disillusioned by Biocoop’s internal management, and felt that the company’s motives were more strongly oriented towards profit than they were towards providing accessible organic food. After two years, Cloux and Vidart left Biocoop to venture out on their own. A year and a half of prep work during Covid resulted in Go Go Kiwi’s opening in April 2021. 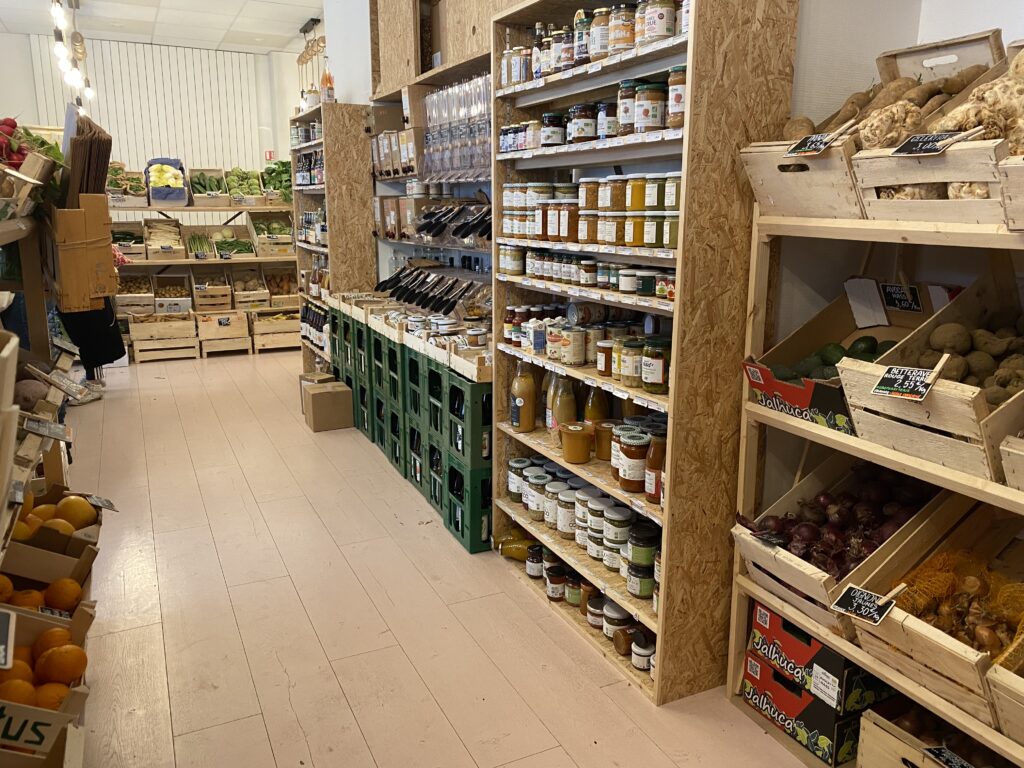 “My store looks like a regular organic store,” Cloux explains. “A lot of products are also in bulk, and we are trying to do as many local products as we can, from a less than 150 kilometer radius.” It’s the earthy crunchy aesthetic we’ve come to expect from organic stores, full of products sold in cardboard or glass packaging, a wall of granola and nut dispensers, and produce cloaked in a light dusting of authentic dirt, as though it’s just rolled off the tractor and onto the shelves. But behind the counter is a chart explaining the store’s sliding scale, where discounts are offered beginning with anyone making under €1700 per month (net). Discounts run from 5% to 35%. For those people making minimum wage or less (about €1250 net monthly), the store takes no margin, and offers products at cost.

In order to take advantage of these discounts, customers submit their tax information, work contracts, or other proof of income online. “We are still testing our model,” Cloux says. “We have maybe 2000 customers who have created a loyalty account for our store, and only 150 made a special [discount] account.” The store had to pay to develop and implement a software to calculate the discounts, and that’s before legal gets involved. 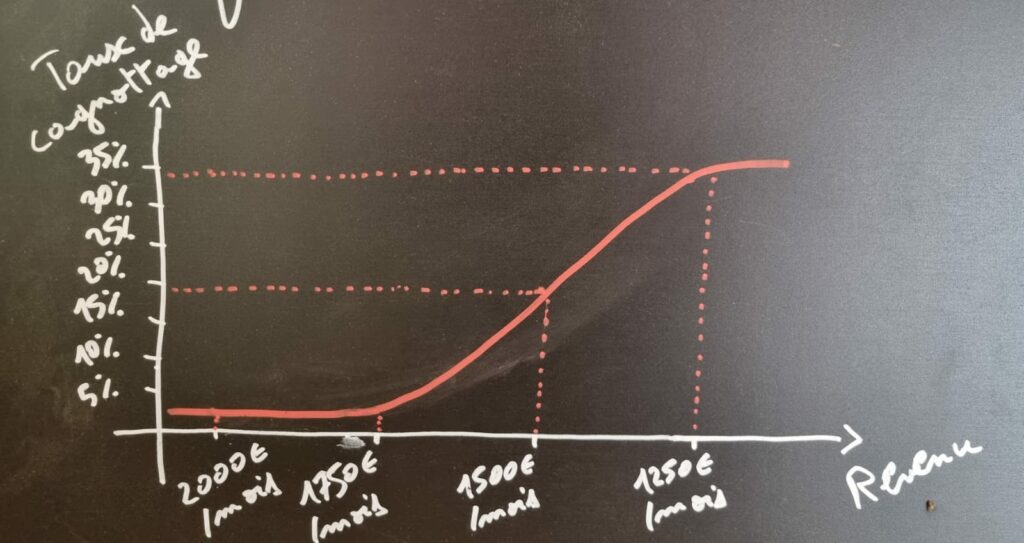 You won’t find advertising for Go Go Kiwi outside of their Instagram page, for surprising legal reasons. “There are a lot of laws that apply to discounts, and advertising around discounts, so we had to involve three different lawyers to make sure this was all legal,” Cloux explains. “These laws are designed for the major actors, but it also affects the small ones like us.” Cloux says that the store is waiting on final advice from their legal team before they begin advertising on a wider scale.

He explains that it was also crucial to make sure that the business model was sustainable, and to find a sweet spot where they could offer maximum discounts without jeopardizing the future of the company. While developing their business model, they surveyed about 200 customers in local organic stores in Paris. “We projected that only 25% of our customers would be eligible for our system,” Cloux says. “But the goal is to make that part bigger in our store. If we can go up to 50%, that would be great.”

For people on minimum wage, Go Go Kiwi hopes to match the prices they would pay at chain stores like Monoprix or Carrefour, in order to lure in customers who might not otherwise shop organic. But most of their customers, Cloux explains, were already buying some organic… but perhaps they weren’t able to allocate as much of their budget as they wanted to pay for bio products. Cloux says that “basically, in Paris, if you’re earning less than €1700 you can’t go all organic, because it’s just too expensive. So I wanted to give the opportunity to anyone to go organic, without sacrificing vacations or going out with friends.” 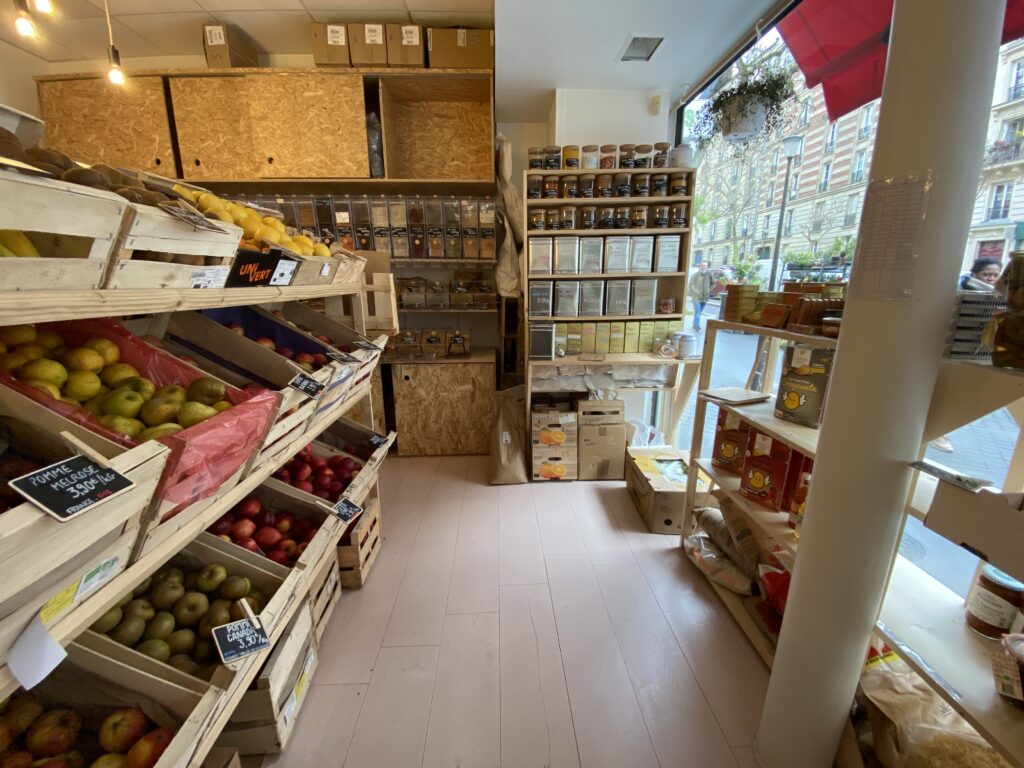 A combination of income levels is important to sustain the model, though. Go Go Kiwi’s location in the 19th arrondissement, just north of Buttes-Chaumont, is a mix of hipsters, immigrants, and working class folks, an ideal crossroads to draw in the types of people already shopping organic, and the people who may not have yet had the opportunity.

When it comes to broader social impact, Cloux says that the mindset in Paris is very trend-oriented, with consumers eager to lower their environmental impact and consume more local and ethically-sourced products. “But I think it’s growing state-wide,” he says.

“I’m kind of an idealist,” Cloux says. “So getting past the first year and making money is a part of success, but it’s not the main part. Because right now, I still don’t earn any money from the store. We can’t pay ourselves. But we have a lot of customers, and we are the one store that has been open for a year with the biggest progression. We are doing well, and it’s still growing at the moment… The real success for me is that we are supporting small farmers, local farmers, who are themselves employing people. It’s not just big companies owning a lot of land and doing agriculture with a lot of machinery. So at the same time, it has an environmental impact, and also a social and economic impact.”

Catherine Rickman is a writer and professional francophile who has lived in Paris, New York, and Berlin. She is currently road tripping around France, and you can follow her adventures on Instagram @catrickman.