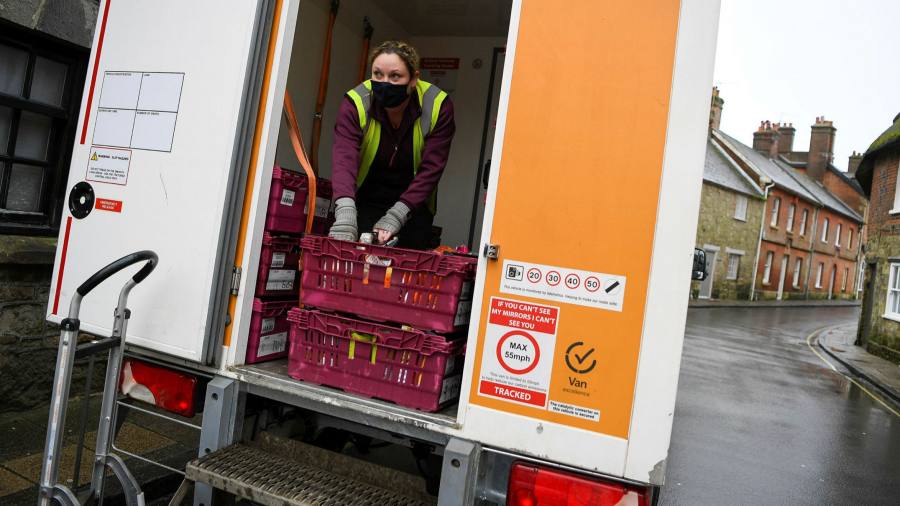 As supermarkets grapple with fraught supply chains and the highest food price inflation in decades, they are also facing another pressing challenge: predicting which of the many pandemic induced trends will endure.

From panic buying and a surge in home deliveries, to a collapse in sales at city centre convenience stores, consumers have upended the way they shop during the past two years.

There are early signs some are reverting to old behaviour, once again making frequent trips to supermarkets and travelling and eating out more, according to Tesco chief executive, Ken Murphy.

But “we definitely haven’t swung right back [to pre-pandemic levels]”, he said.

“I think we’re half way between if I’m honest and I think the cost pressures we are seeing on household incomes might slow that reversion down further”.

Ocado, the British online supermarket, said in March that average basket values in its first quarter had fallen 15 per cent from last year’s level, to £124, as customers ventured out more and ate at home less.

At Tesco and Sainsbury, online orders have also fallen back from their peak of about 20 per cent of sales, but still account for around 14-16 per cent, compared with 9 per cent before Covid.

“How we consume is driven by how we live,” said Andrew Walker, client knowledge director at consultancy Kantar. “We are still spending more time at home than we did in 2019 and everything else flows from that”.

The extent to which people will continue to work from home is one of the biggest unknowns — and one of the most influential factors on food shopping.

According to Remit, another consultancy, UK offices are running at 25 per cent of their pre-pandemic capacity, while Transport for London estimates Underground usage in London’s financial district at about half pre-Covid levels.

Tim Steiner, chief executive of Ocado, said that continued working from home was evident in the pattern of demand for delivery slots. “Sunday slots are not as popular as they used to be, perhaps because more people are still at home on Monday — which is more popular than it used to be”.

Through the lockdowns, demand was spread evenly throughout the week, with the traditional weekend spike almost disappearing. “At one point we could have sold any slot, people would have taken deliveries at two in the morning,” he said.

Some of these trends have persisted; according to Kantar, alcohol sales are still running 17 per cent higher than pre-pandemic levels. J Sainsbury chief executive Simon Roberts expected the trend of home cooking “will really grow as the cost of eating out continues to rise”.

Much of the well-publicised growth in ecommerce during the pandemic came from older people, who were effectively forced to use it for the first time, added Walker.

But as restrictions eased, those shoppers made “the fastest correction to where they were before”, helping to drive a pullback in grocery ecommerce overall.

A rise in use of local convenience stores early on in the pandemic, when people were reluctant to venture far from home, proved relatively shortlived.

Chris Whitfield, chief operating officer at convenience market leader, Co-op, acknowledged that its market share had returned to pre-pandemic levels, but said two years of Covid had “helped shape the growing importance of local convenience stores being there for more than just a top-up shop”, citing access to cash and postal services.

At Sainsbury’s, convenience sales in high streets and urban centres are back at pre-pandemic levels, but city centre locations that cater heavily to office workers are still around 20 percentage points below.

Rapid delivery, often in 30 minutes or less, has been another feature of the pandemic as stores such as Co-op teamed up with the likes of Deliveroo and Uber Eats or launched their own same-day services. Start-ups such as Getir and Gorillas, flush with venture capital, expanded aggressively.

Murphy pointed out that the model of charging higher prices for speed and convenience was untested at a time when household budgets were under acute pressure.

Steiner predicted this market would continue to evolve. “There’ll always be people prepared to pay a premium to get something quickly. But if you constrain your range to 1,000 items and ask people to pay 30 per cent more — not many people are going to do that very often”.

The pandemic also temporarily slowed the growth of discounters Aldi and Lidl, as their lack of online offerings and narrower product ranges pushed customers towards conventional supermarkets.

Walker said they were now recovering, and could accelerate those gains as household budgets came under increasing pressure. The four biggest grocers are better prepared this time, having improved their efficiency and reduced the price differential with discounters.

But as other challenges mount — particularly the pressures of sharply rising inflation, trading in the sector is still far from settling into a “new normal”.

“I cannot remember a time like this in my entire career,” said Roberts.