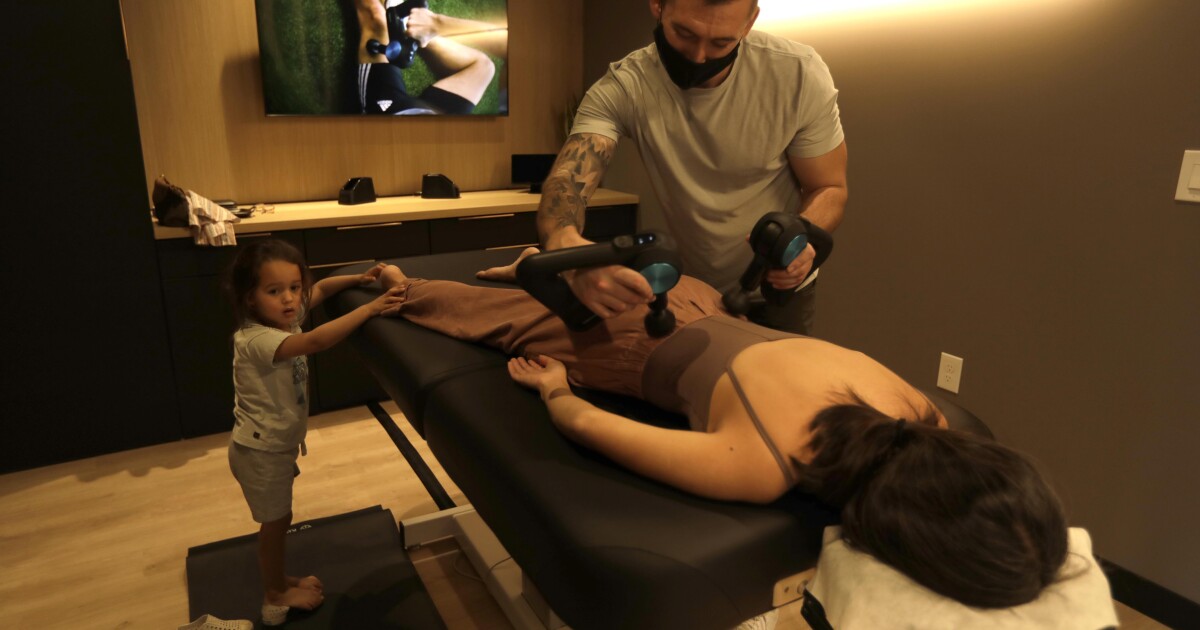 If you’re thinking about buying a hand-held massager that bonks you 40 times per second, it’s hard to get a sense of what that feels like on the internet.

That’s one reason, after years of selling primarily online, the maker of cult-favorite Theragun is opening stores in a handful of U.S. cities where customers can not only try out the popular massage gun but also dabble in the kind of exotic physical treatments used by pro sports teams, such as cryotherapy, light therapy and hyperbaric chambers.

Therabody, the company behind the line of muscle-pummeling devices, just opened its first Reset wellness center in Brentwood, with five more to follow, plus six additional retail stores without the mega-wellness approach — all this year.

E-commerce sellers have been making the leap to brick-and-mortar stores in recent years to lure customers who want to experience products in person or pick up things ordered online, which gives merchants a chance to sell them even more stuff. In industry lingo, that’s known as omni-channel retailing.

But industry observers say the online-to-offline trend is accelerating in spite of some predictions that people would learn to rely on home delivery during the pandemic, spelling trouble for conventional stores.

Helping push these offline openings is an Apple software overhaul last year making it easy for users to opt out of internet tracking and harder for apps and advertisers, including your favorite e-commerce merchant, to know consumers’ online shopping and web-browsing habits. Apps now must ask permission to monitor users’ internet activity through pop-up windows, and most iPhone and iPad users are regularly saying no.

The privacy tool caused digital advertising prices to jump and squeezed earnings for companies such as Snap Inc. and Facebook parent Meta Platforms Inc., which pointed to Apple’s ad-tracking update as a factor in its dismal earnings report on Feb. 3 — followed by an unprecedented loss in stock value of more than $230 billion.

Because retailers no longer are able to target many iPhone users with those annoying shopper-specific ads that follow you around the internet, they’re having to find customers in other, costly ways, perhaps paying for increasingly expensive online advertising or springing for social media influencers, where top performers can command more than $10,000 a post.

The jump in costs for growing online businesses “has been a massive accelerator for us” in attracting “digital native” tenants to Westfield shopping centers, said Colin Shaughnessy, head of leasing in the U.S. for shopping center owner Unibail-Rodamco-Westfield. “We’re seeing a whole new wave of brands.”

Prominent mall operators such as Westfield and Caruso, which once preferred big national chains because they are reliable rent payers, are actively wooing popular online retailers for the revenue they bring and the buzz they create in shopping centers long ruled by the same old brands.

“Our leasing team is constantly online seeing what is trending and we approach them,” shopping center magnate Rick Caruso said. “Our people are in tune with what’s popular and we go after it” if the merchant looks like a fit for one of his upscale malls, including the Grove in Los Angeles.

(Caruso is running to be mayor of Los Angeles and has said he would put his company in a blind trust if elected.)

Caruso didn’t cite Apple’s privacy modification as a driving factor, describing the shift as primarily a movement by savvy retailers to try to meld their online and physical sales patterns in ways that goose both. Stores can serve as storage for goods to be shipped or as places to pick up products ordered online.

Caruso approached Meyer to be part of the Village when it opened in 2018, she said, well before Apple made its move. “The plan was always to open a store, but not at that time. I took a leap and went with it and it and it turned out to be the right idea.”

Meyer previously sold her necklaces, rings and other jewelry online and through luxury retailers including Barney’s New York. Having her own store has prompted established customers to travel from as far away as Arizona, she said, while others are casual visitors to the shopping center.

At 30,000 square feet, it will be similar in size to a Kohl’s but should have more variety than a conventional store because only one of each piece of clothing will be on display, with the rest stored out of sight to be delivered to fitting rooms. There, customers can browse touch screens for more options or to request a different size. Company algorithms will produce recommendations to customers.

Cryotherapy, which involves standing for a few minutes in a chamber where the temperature is 180 degrees below zero, is said to commonly provoke a stream of profanity followed later by a pleasant rush of endorphins, a boost to one’s immune system and a reduction in inflammation.

Twelve minutes in a therapy bed getting penetrating near-infrared light like a human plant is intended to relieve joint pain, relax muscles and improve blood flow.

Hyperbaric oxygen therapy conducted in a special chamber has a host of benefits, according to Johns Hopkins Medicine, including repairing tissues and strengthening the immune system.

Treatments such as these are growing common among professional and college sports teams, Therabody Chief Executive Ben Nazarian said, but can also be helpful to people who may just be stiff from sitting at their desks too long.

“As we learn what the elite athletes are doing, it gives us a chance to figure out how to bring it to the everyday consumer,” he said. He hopes to make such services affordable to many, starting as low as $45 for a Theragun massage.

And then there are the Theragun products, led by the internet-famous Theragun, which starts at $199. There are also muscle stimulators to speed recovery after a workout and pneumatic pressure boots and sleeves to relieve pain and soreness.

The Theragun was an invention born of necessity, said Therabody founder Jason Wersland, a chiropractor who crashed his motorcycle into a car at 55 miles per hour in 2007. His most profound injury was a bulging disc in his neck that caused him debilitating pain around the clock. He didn’t like the choices he had to feel better.

“I found that my only options were narcotics or surgery,” he said. “I was actively looking for something to make the pain stop.”

Wersland found the pain was eased somewhat by a little-used chiropractic tool in his office for percussion therapy, applying impulses instead of vibrations. He set out to improve on the concept, starting with some power tools in his garage. He bent down the blade on a hand-held jigsaw, then wrapped a towel and tape around it.

His creation gave him meaningful relief, and the foundation for Theragun was laid. The company now known as Therabody was founded in 2016 with a goal of being a direct-to-consumer company, Nazarian said.

“The news at the time was always, ‘retail is dead, e-commerce is the way to go,’ and we thought it would be a much more efficient way to build a company,” he said. “That’s how we started.”

The founders came to realize that “with a new product in a new category, people want to touch and feel” it, he said.

They moved into wholesale distribution before testing in-person sales in a small kiosk in Westfield Century City mall in 2019. It performed well and, after a pandemic-related delay, the company began opening a few full-fledged retail stores in 2020.

But now the company is amping up the conventional retail side; it has invested $13 million in the stores and developing the Reset wellness centers in the last two years, Nazarian said.

In addition to the Brentwood location, other Reset stores are set to open this year in Manhattan Beach, New York, Chicago and Houston. They’ll be located in neighborhoods with concentrations of customers who have already shopped for Therabody products online.

Executives did not disclose financial results but said Therabody has been profitable since 2017, with nearly 600 employees and sales in more than 60 countries. In September, it was ranked 61 on Deloitte’s annual list of fastest-growing tech companies, reporting 2,742% growth in revenue from 2017 to 2020. Year-over-year sales grew more than 80% in 2021, the company said.

Waning pandemic restrictions will inspire other online sellers to make moves to physical stores, said Jonathan Lorenzen, an attorney at Allen Matkins who works with retail landlords and tenants.

“People are so drawn to their phones and computer screens, but there still is this element of physical interaction with the product that you really don’t get on a phone,” he said. Coming out of the pandemic, retailers see the chance “to maybe show their products are of higher quality, to differentiate what they have and maybe get a higher price.”